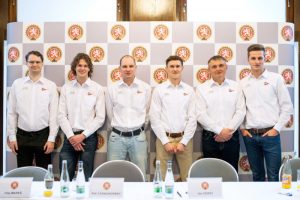 The FIA European Rally Championship-bound ACCR Czech Team was unofficially unveiled to the Czech media during a press conference in the capital Prague yesterday.

An exciting initiative for 2017, the ACCR Czech Team will support three bright prospects with Jan Černý going for gold in ERC Junior Under 28 and Dominik Brož and Filip Mareš building their experience of international competition in ERC Junior U27.

Adam Elias, CEO of AUTOKLUB Czech Republic, welcomed media to the organisation’s headquarters before underlining the importance of supporting young drivers and confirming that the ACCR Czech Team’s rally programme is the flagship project for 2017.

Tomáš Kunc, Vice President for Automobile Sport, AUTOKLUB Czech Republic, explained that while the Czech federation has supported young drivers competing internationally in the past, the ACCR Czech Team’s ERC campaign for 2017 is the first time that it has put in place a multi-driver line-up. Kunc also spoke about the close collaboration that exists between the AUTOKLUB and Eurosport Events, the ERC promoter.

Brož was unable to attend the press conference as he was busy overseeing the loading of his Peugeot 208 R2 in the Portuguese port of Setubal ahead of the journey to Ponta Delgada, venue of the ERC season-opening Azores Airlines Rallye from 30 March-1 April. Meanwhile, Černý and Mareš will contest this weekend’s Czech championship Valašská Rally before flying to São Miguel for the start of reconnaissance next Tuesday.

Official website of Filip Mareš, Czech rally driver, who will participate in the Czech rally championship in 2021. Whole the championship with Škoda Fabia Rally2 evo co-driven by Radek Bucha!