Four drivers will battle for one of the biggest prizes in junior motorsport when Rally Liepāja hosts the deciding round of the 2017 FIA ERC Junior Under 27 Championship from 6-8 October.

As well as the honour of becoming an FIA champion, the winner will receive 100,000 euros to put towards an FIA ERC Junior Under 28 campaign in 2018 when they will step up to an R5 car. 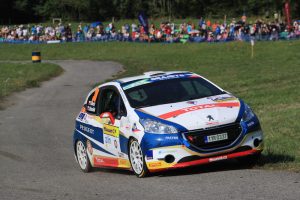 The amount provided by ERC promoter Eurosport Events will fund two ERC Junior Under 28 appearances next season in a Motorsport Italia-run ŠKODA Fabia R5 and incentivise the champion to secure the additional support for a full-season campaign totalling six events, although drivers count their best four scores only. Indeed, Marijan Griebel secured the inaugural ERC Junior U28 title this year with a four-event programme of rallies.

With five rounds run in ERC Junior Under 27 in 2017, Filip Mareš – who competes with the full backing of the Czech motorsport federation in a Peugeot 208 R2 – heads the standings a mere two points in front of Opel Rallye Junior Team driver Chris Ingram from the UK. Hyundai Motorsport’s new world championship recruit, Jari Huttunen from Finland, and fellow Opel ADAM R2 driver Aleks Zawada from Poland are firmly in contention, 11 and 18 points behind Mareš respectively.

All ERC Junior Under 27 drivers use Pirelli tyres as standard and all have progressed to the ERC from national competition, which highlights the role ERC Junior plays in providing a clear path of progression from national to international level. This is what the title contenders have had to say:

Filip Mareš (CZE) Age: 26 Car: Peugeot 208 R2 Position: 1 Points: 117 Wins: 1
“It’s going to be a really important rally because we are now leading but I have to keep my feet firmly on the ground because I don’t have so much experience on gravel. It will be really tough especially against Jari, who won Rally Finland in WRC2. And of course Chris and Aleks are incredibly fast everywhere. But I am determined to work hard and be successful and I definitely won’t give up without fighting. It’s been a crazy year for me and I’m really happy I’ve shown good progression during the season. It’s really fantastic to be in the lead and I’m excited about it. I don’t feel any pressure at this moment because it’s a really unexpected situation for me. I will do one small rally in Latvia this weekend and a small test on Tuesday with Mārtiņš Sesks, plus of course the last round of the ERC Junior Experience will be on Wednesday with gravel training from Urmo Aava. The preparation will be good and I hope I will be competitive.”

Chris Ingram (GBR) Age: 23 Opel ADAM R2 Position: 2 Points: 115 Wins: 2
“Going to Latvia with the chance of winning the FIA ERC Junior U27 Championship knowing it’s in our own hands is a great feeling. After driving the first rally with Ross Whittock by my side in Rome I know we will be in good shape at the final round of the season. At the Azores myself and the ADAM R2 have shown we have the potential to win on gravel. So that’s the goal for Liepāja. The competition will be tough as always in ERC Junior, so we are facing a heck of a task. But I am confident we can do the job. My Opel Rallye Junior Team will provide a perfect car and the best possible support as they did the whole year.”

Jari Huttunen (FIN) Age: 23 Opel ADAM R2 Position: 3 Points: 106 Wins: 1
“Thanks to the dropped-scores regulation in FIA ERC Junior U27 we are still in a very good position to fight for the championship, even if we had two bad results at Azores and Barum. In fact, Antti and I can capture the title of our own accord in Liepāja in our ADAM R2 pocket rocket, so the task formulation is quite easy: We want to go for maximum points in Latvia, and if we are good and lucky enough to make it to the end with no mistakes, we will be in good shape. But anything can happen in the highly competitive Juniors so we will see.”

Aleks Zawada (POL) Age: 25 Opel ADAM R2 Position: 4 Points: 99 Wins: 1
“My chances are not as good as they were after I retired in Italy but we’re still there and the driver who wins in Latvia has the best chance of winning the championship. But winning outright won’t be easy against three drivers who are all very strong and Jari, especially on gravel, has an advantage over us. We’ll attack as hard as we can but rallying is very unpredictable and anything can happen to anyone. We’ve got to push as hard as we possibly can but be there to capitalise on any mistakes. It’s that kind of game between risk and speed. I’m no slouch on gravel but my personal feeling is not as great as it is on asphalt. But at this point in the year when it’s all or nothing it’s really not something I’m thinking about.”