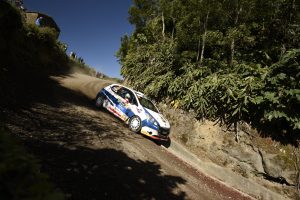 A podium finish for Filip Mareš in the FIA ERC Junior Under 27 Championship signalled a successful start for the ACCR Czech Team’s ERC campaign on the Azores Airlines Rallye last week.

Mareš placed third in class in his Peugeot 208 with Dominik Brož sixth after he battled back from myriad problems in his similar car.

“I’m on the podium, which is amazing after a very difficult rally for us, the most difficult race for me and only my third race on gravel,” Mareš said. “I was learning throughout the weekend and I’m really happy to be here. We went off the road in a slow, left corner on the final morning and there were not some spectators to help us so we lost maybe four minutes but we are here and we are happy.”

Jan Černý was also in action for the ACCR Czech Team at the wheel of a ŠKODA Fabia R5 in the ERC Junior U28 division. He was on course for second place only to crash out on the final morning.

“I feel like an idiot because we were close to finishing second,” said Černý. “We were driving normal speed, not so much pushing. In one corner, in second gear, the rear part of the car got out of the correct line. It was a narrow road and with the rear we hit a tree and rolled. I’m really sad about it because it was the only mistake of the rally and it wasn’t a big mistake but the result is so disastrous. Early in the rally I wasn’t happy with the pacenotes because I couldn’t find the correct pace and rhythm and missing the test on Monday did not help but it was impossible to be there because I was doing a rally in Czech Republic the previous weekend.”

The ACCR Czech Team will be back in action when the 2017 ERC resumes on Rally Islas Canarias next month.