Filip Mareš says his highly impressive first season of international competition was only possible through the support of the Czech motorsport federation, which backed his FIA ERC Junior Under 27 Championship campaign. 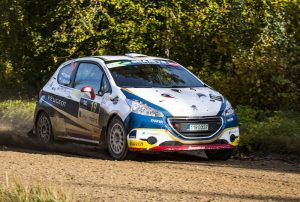 Mareš started last week’s Rally Liepāja firmly in the hunt for ERC Junior Under 27 title glory but his lack of gravel experience ultimately forced him to settle for third place instead behind champion Chris Ingram and runner-up Jari Huttunen, which nevertheless represented a remarkable achievement.

“It was my second proper rally on gravel and definitely it was difficult to be on the [same] pace as Jari and Chris,” said Mareš. “We made good progress and we could go faster but we need more kilometres on gravel. I am quite satisfied because nobody expected we would be on the podium at the end of the season. But I want to say a big thanks to Autoklub Czech Republic and also all our sponsors because without their support this would not have been possible.”

While Mareš has yet to finalise his 2018 programme, an ERC return is the target. “I hope to keep going and I hope to be competing in the European championship. It’s a great and highly competitive championship for young drivers. Hopefully we’ll be back.”